A gaggle of noteworthy architects are due to put their stamp on the Hudson Yards megaproject, but if the Wall Street Journal is to be believed, two bona fide starchitects may be joining their ranks.

WSJ reports that “a person familiar with the matter” claims that Santiago Calatrava and Frank Gehry have been tapped to design buildings for the megaproject’s second phase, due to rise over the west side rail yards (stretching between 30th to 33rd streets from Eleventh to Twelfth avenues).

Read the full article at: ny.curbed.com

Hudson Yard project in NYC continues to attract some of the best architects in the world, with the recent addition of Frank Gehry and Santiago Calatrava who, according to the Wall Street Journal, have been tapped to develop buildings of Phase II of the project. Phase II of Hudson Yard will occupy the area from West 30th Street to West 33rd Street between 11th Avenue and the West Side Highway in New York. Phase II will be comprised of residential towers, an office complex and a school serving students from K-8th grades. Phase II of the Hudson Yards project is expected to be completed by 2024.

10 Hudson Yards, the first office tower to open in May 2016, is 52-stories tall. It was designed by Hudson Yards Master Plan architecture firm Kohn Pederson Fox and is home to Coach, L’Oreal, Vayner Media, and SAP

15 Hudson Yards, the first residential tower to open at the end of 2018, is 71 stories tall and was designed by Diller Scofidio + Renfro, with interiors by David Rockwell and Ismael Levya architects.

30 Hudson Yards, a 92-story office tower will house Time Warner, CNN and HBO corporate offices. The building was designed by Kohn Pederson Fox and occupancy is expected by the end of 2019.

35 Hudson Yards, a 79-story tower will feature an Equinox branded hotel and 36 floors of residences, was designed by David Childs of SOM, formerly Skidmore Owings Merrill.

50 Hudson Yards, a 58-story tower, which will house BlackRock, was designed by Foster + Partners.

55 Hudson Yards was designed by  Kohn Pedersen Fox and Kevin Roche John Dinkeloo and Associates. To-date it has attracted a plethora of financial firms and hedge funds such as Point72 Asset Management that manages the assets of Steve Cohen, Third Point headed by Daniel Loeb, and Stonepeak Infrastructure Partners. In addition, law firms Cooley and Boies Schiller are future tenants.

The Shops at Hudson Yards was designed by Kohn Pederson Fox and will be a 7-story luxury destination with a combination of global icons, independent boutiques and an array of restaurants. It will be home to NYC’s first Neiman Marcus, Cartier, Patek Philippe, Stuart Weitzman, Van Cleef & Arpels, Zara and H&M, among others. In addition, Thomas Keller will curate the restaurant collection at Hudson Yards and will feature some of the best dining in the world. Costas Spiliadis, Michael Lomonaco, David Chang and Jose Andres will all have restaurants here.

The Culture Shed is a six-story telescopic building designed by Diller Scofidio + Renfro and Rockwell Group. Renamed the Shed, the building will be a visual arts and performing arts center on the south side of Hudson Yards. Scheduled for completion in 2019, it is expected to be home to several high profile events, including New York Fashion Week. 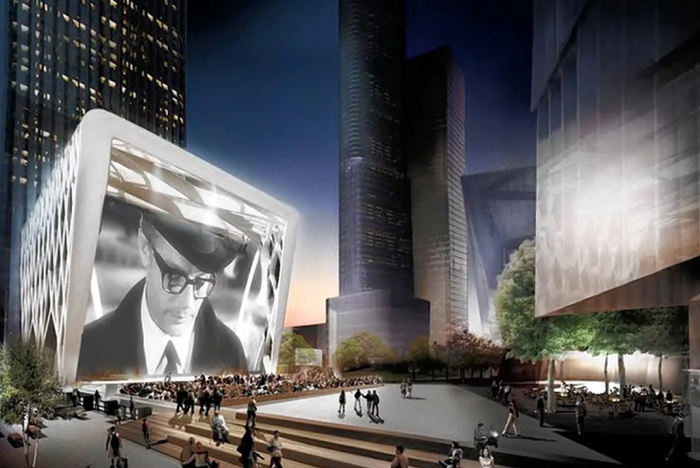 The Vessel, a $200 million sculpture at the center of Hudson Yards Phase I, what has been likened to NYC’s Eiffel Tower, was designed by British designer Thomas Heatherwick, who is also designing two luxury condo towers straddling the high line at 515 West 18th Street in Chelsea.